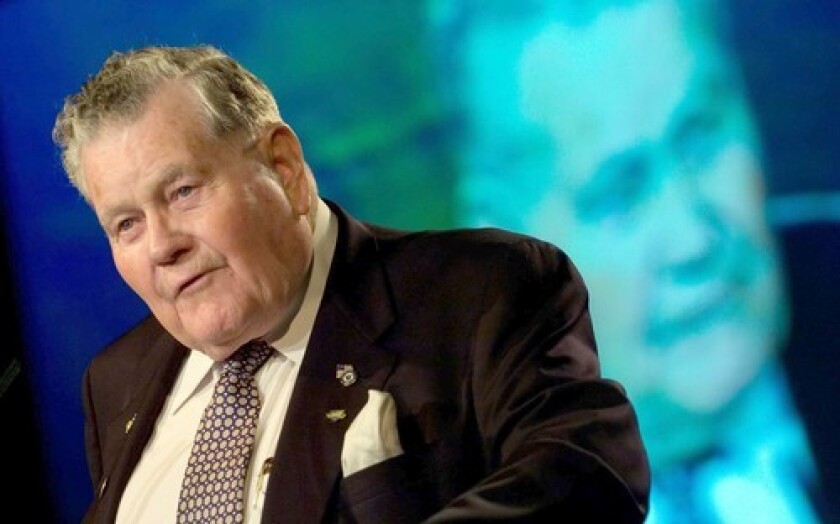 Rear Admiral Wayne Eugene Meyer (April 21, 1926 – September 1, 2009) is regarded as the “Father of Aegis” (FOA) for his 13 years of service as the Aegis Weapon System Manager and later the founding project manager of the Aegis Shipbuilding Project Office.  He is the namesake of DDG 108, an Arleigh Burke-class guided missile destroyer in the United States Navy.  Meyer retired from the United States Navy in 1985 as the Deputy Commander for Weapons and Combat Systems, Naval Sea Systems, Naval Sea Systems Command and Ordnance Officer of the Navy.

Rear Admiral Meyer was the leading proponent of systems engineering in the Navy, along with Admiral Hyman Rickover for the Nuclear forces (submarines).  One of the most significant accomplishments of Aegis was engineering the system as a system, and not a collection of parts built by different program offices.

In a recent Naval Postgraduate School webinar focusing on systems engineering, a few of Meyer’s quotes were provided, and they remain just as relevant today.

Time only goes in one direction.

In engineering you have to start from where you are, not where you wish you were.

Be careful of single point solutions.

A system is people, parts, paper and programs.

The system is whatever the organization is.

If we can’t win the battle, it doesn’t matter how elegant your differential equation is.

We can’t engineer the impossible.

There ain’t no perfect solution to an imperfect problem.

You can only build what you know how to engineer.

Engineering is plodding and slow.

If you can’t describe the cornerstones, you can’t engineer it.

You need numbers to go with the cornerstones.

Additional quotes from ADM Rickover include:

Nothing so sharpens the thought course of as writing down one’s arguments.  Weaknesses ignored in oral dialogue change into [something] painfully apparent on the written web page.

You possibly can’t go to heaven when you die dumb.

Human expertise exhibits that folks, not organizations or administration, get issues accomplished.

Good concepts and improvements are usually not adopted mechanically.  They should be pushed into existence by braveness and persistence.

I imagine it’s the responsibility of every one of us to behave as if the destiny of the world relied on him.  Admittedly, one man by himself cannot do the job.  Nevertheless, one man could make a distinction.  We should reside for the way forward for the human race, and never for our personal consolation or success.

When doing a job, any job, one should really feel that he owns it, and act as if he’ll stay in that job without end.  He should take care of his work simply as rigorously, as if it had been his personal enterprise and his personal cash.

I feel you make your heaven and hell proper right here on Earth.  You must act on this Earth as if it had been heaven.

Admiral Meyer died on September 1, 2009 and was laid to rest at Arlington National Cemetery on September 17, 2009.  The ship named in his honor was commissioned on October 10, 2009 in Philadelphia, Pennsylvania.  He leaves behind a legacy that continues to guide our industry, as well as teach forward-thinking through proven ideas.  His words remain as true today as during his lifetime.